Here is a basic explanation of plot structure—similar to what you’ll hear in any high school language arts class. Examples of each plot point come from the adorable kids’ book Giraffes Can’t Dance, by Giles Andreae and Guy Parker-Rees. The appeal of this book for kids is obvious, but I have also found it helpful in explaining plot structure in high school and adult creative writing classes.

What is a writer’s job in the exposition of a story?

What happens during the rising action of the story?

What happens during the climax of a story?

What happens during the falling action of a story?

What is the author’s job in the resolution of a story?

You’ve also probably seen this diagram, which illustrates the five-part plot structure above: 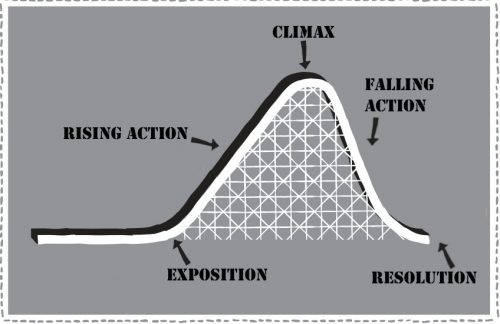 Here’s how Giraffes Can’t Dance, by Giles Andreae and Guy Parker-Rees, fits into each of the examples above. (Warning: This summary contains spoilers. You’ll have to stop reading now if you want to find out yourself whether Gerald the Giraffe learns to dance by the end of the story.)

Main character: Gerald the Giraffe
Setting: Jungle
Situation the main character is used to: being clumsy and awkward. Gerald can barely walk without tripping! He certainly can’t dance, right?
Inciting incident: The Jungle Dance. Gerald is going to have to leave his comfort zone of “standing still and munching shoots off trees.”

All the other animals are great dancers. One by one we see that they each have a cool dance they can do at the Jungle Dance. Pretty soon it’s going to be Gerald’s turn. Uh oh!

Gerald tries to dance but the lions “saw him coming and they soon began to roar.” Gerald gets laughed at, bullied, and called “so weird.” Then, saddest of all, he has to walk home alone while all the other jungle animals do a conga line without him. So, so sad!

A cricket who’s been watching shows Gerald that he actually can dance. He just needs his own music. And once he starts breaking it down in that jungle clearing, all the animals who laughed at him earlier show up and start cheering him on.

Gerald finishes with a bow and teaches the other animals (and us) an important lesson.

Plotting can also get more complicated than this. According to author Christopher Booker, there are seven basic plots that most stories follow.

Book a 45-minute, confidential Zoom or phone session tailored to any teaching-related topic you want to talk about.
Book Now
Close
Loading Comments...