Readers of my novel, Adequate Yearly Progress, may notice a pattern when it comes to educators talking about their jobs in public. In the book, there are several scenes in which a teacher or principal tries to explain an educator’s point of view in the media, and it goes terribly wrong. Sometimes, the educator is simply shut out of the discussion and never gets heard at all. Other times, the situation turns into a complete disaster as a career educator ends up facing off with a public figure who doesn’t know much about education but sure seems to have a better sense of . . . something.

That something is media training. You may also hear it called media coaching, message coaching, or media relations training. Politicians, brand representatives, and celebrities have often had some form of this training—sometimes a lot of it. It’s the reason they’re able to feel sure-footed in front of audiences who may not always like what they have to say.

Teachers’ reactions to the idea of media training often fall into one of two buckets: either Why would I want that? or Why would I need that? After all, the most important part of the job is to communicate with and serve the students in the class. Yet in today’s political climate, public communication can be an important skill for educators. There have always been controversies in education. There have always been people who try to spin these controversies to further their own agendas. And there have always been too few actual teachers participating in public discussions about teaching. But there’s also an increasing atmosphere of outrage-based politics and a sense that the spotlight could swing toward an individual educator who was never looking to step into it.

Which means that public figures aren’t the only ones who should learn the basics of public communication.

This was a lesson I learned the hard way after my first book, See Me After Class, came out. The book opened up numerous opportunities to talk about teaching in public. I often found myself trying to communicate the nuances of my job in short radio segments, or in interviews that would be quoted in articles, or on televised panel discussions about “how to fix the school system.”

But as it turns out, good teaching doesn’t make for good TV.

If the graphics below seem like they’re clipped from a presentation slideshow, that’s because they are. After my own my own fast-paced introduction to public communication, I began providing public communication training sessions for educators who wanted to make their voices heard. I’ve written extensively about the media narratives that shape the public perception of educators, including this five-part series for the Washington Post. I also work one-on-one with individual educators to prepare for media appearances or hone specific messages in both their speaking and written communication.

True to the “rule of three” that is part of so many types of effective communication, I start most of these presentations with three key differences between talking to students and talking to the general public.

1. How we think about our audience 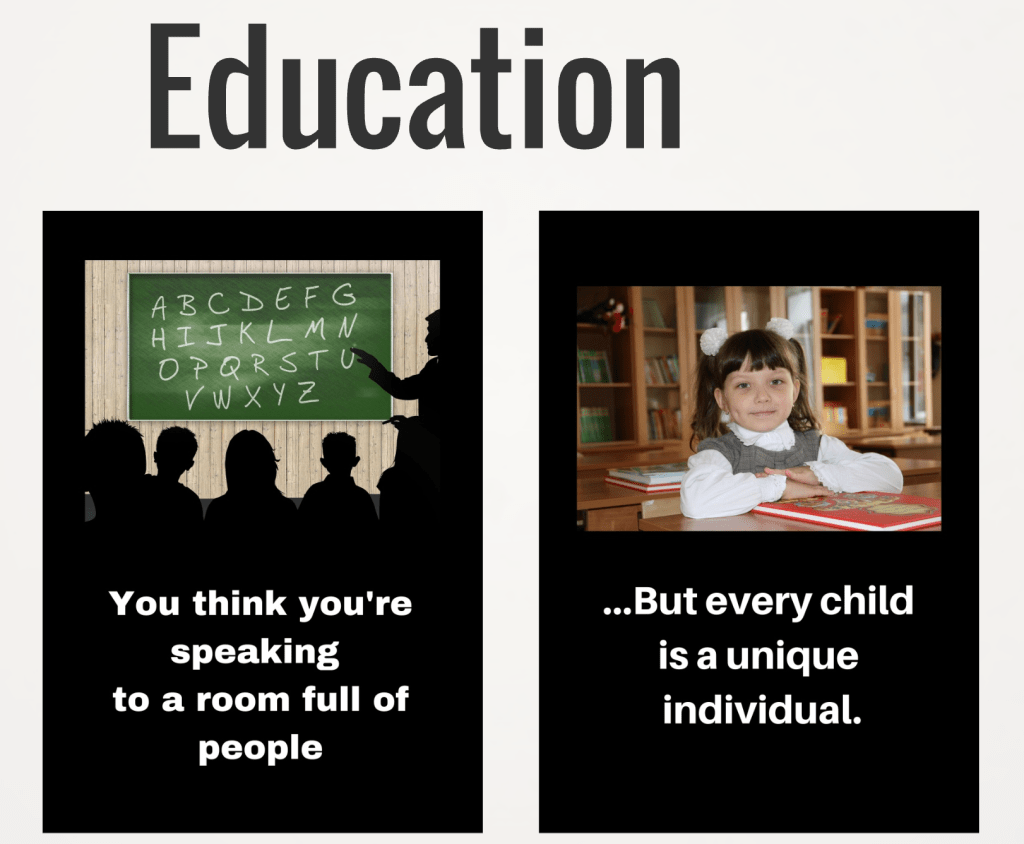 An educator’s job is to build a connection with the audience in the room. In fact, most educators probably don’t think of their students as an “audience” in the first place. They are unique individuals, each with their own strengths, needs, and learning styles, all of which a teacher aims to address during the course of the school year. In a press conference or televised public forum, the opposite is true. The people at the event are a tiny fraction of the expected audience, which includes people who watch the event on TV, people who watch the TV clips posted on social media, and maybe even social media clips that a campaign will pay to micro-target to a specific audience.

2. How we think about time

Pacing is an important skill in both teaching and public communication. But planning a lesson that wraps up three minutes before the bell is very different than planning a message to be delivered in seconds. Educators know that if a lesson ends too early, they can lose control of the class. Public figures know that if they go on too long, they can lose control of the message.

3. How we think about what it means to do a good job

If you’ve ever heard a live interview with a politician, you may have noticed a phenomena that seemed irritating or even awkward in real time: they often don’t really answer questions. I once attended a “town hall meeting” in which the headliner repeated the same sentence, in the same tone of voice, with nearly the same physical gestures, as the answer to multiple questions in a row. After one such evasion, the person at the Q&A microphone said, “My question was. . . ” and then re-asked his question, also repeating his original tone of voice. The room burst into laughter applause. Teachers know they could never get away with robotic repetition in a classroom setting—and why would they want to? An educator’s job is to encourage students to think critically, and to move them along the path toward better understanding. However, this seemingly-bizarre behavior could make sense for a person who wants to control how they are quoted—and to make sure an off-the-cuff comment doesn’t circle back to haunt them.

These three differences are just the beginning.

What does it mean to “stay on message,” anyway? And how do you do it when you are nervous, or emotional, or if the interview takes an awkward turn? What is the best use of your time when preparing for an interview? How do you avoid wasting hours trying to predict what another human is going to say or ask? And how do you boil down a job as complex as education into a brief, memorable quote?

Which brings us to another question. . .

Is there something a little evil about turning our jobs into a soundbite?

When I first learned there was training available on how to speak to the media, I felt as if I had stumbled upon some type of dark art—especially when I learned that a day of private media training can start at $4,000! Compare this to a typical teacher training, where the hosts buy muffins from Costco and cut them into quarters to save money on snacks.

But cost wasn’t my only hesitation. I’d become an educator because I wanted to communicate the way educators do. I liked delving into complex topics with my students, answering questions, and treating students as individuals. These are all challenging skills in themselves, and I’d spent my entire teaching career trying to get better at them. I didn’t want to suddenly start talking like a politician.

Over time, however, I realized media training is not inherently good or bad. It’s a skill, among many. Teachers can learn it. And they should.

Every challenge has its share of frustrations. Public communication and media communication are no exception. But more than anything, my experience serving as a teacher voice for issues that are important to me has been both rewarding and fun. The same can easily be true for you. Which is why it feels necessary to share this slightly more cheerful message, which is usually on the screen as I close out  presentations:

It means a lot to be able to bring a teacher’s perspective to the table and to help frame issues with the nuance that comes from actual classroom experience. Rather than watch other people debate education issues and hope they get it right, or hope you’re never accidentally put on the spot yourself, it feels good to be able raise your hand and actually hope you’re the one who gets called on.

You are a professional communicator, after all.

If you’re an individual educator who would like help with public communication, that’s one of the topics we can cover in one-on-one sessions of See Me After Class Office Hours. For group trainings, or for help preparing a larger education-related platform in a difficult political climate, you can find more information on my speaking page.

Book a 45-minute, confidential Zoom or phone session tailored to any teaching-related topic you want to talk about.
Book Now
Close
Loading Comments...
Share this ArticleLike this article? Email it to a friend!
Email sent!